Wacky Vehicles You Won’t See On The Road

New vehicle models are available, and car manufacturers are eager to get their new products noticed and sold. But we found 10 vehicles that you will never find on the road. Our tongue-and-cheek list shows you the wackiest driving machines that would have been a pleasure to own. If you like nutty vehicles, you'll enjoy this list.

1. Ford Rhinoceros.  At twice the size of other vehicles, and featuring a protective skin and protruding horns, nobody will mess with you when you show up driving this massive machine. It only gets 2 miles-per gallon, but it quickly reaches its top speed of 40 miles-per-hour. It will also eat all of your pets, so be careful! However, if you don't like mowing your lawn, you might have found a valuable time-saver. Just make sure you have a moat around your house for your neighbor's safety. A deep moat will keep your rhinoceros happy.

Available in two colors only (tan and gray), leather seats are standard, and air bags are not needed. Insurance rates are quite high since parking in tight spots is difficult. If you like absurd ideas, you'll like this. Parking is available at your local zoo. They might also help you feed your vehicle. Vegetables are the only allowed fuel since meat will ruin the engine. Oil changes are rarely needed, but a special alarm system is required to protect the horns from poachers. This vehicle is considered an endangered species in 17 countries and two planets. And finally...They love to visit zoos.

2. Toyota Iceberg. Named after one of the great natural beauties of the world (no...not lettuce!), the Iceberg smashes through glaciers, boulders and even buildings with reckless abandon. Its front fender is made of galvanized steel, and even a SCUD missile can't penetrate the armor. An added bonus is that most of the vehicle can't be seen since it is underground. Just don't collide with it, or you'll sink like the Titanic. And of course, the favorite coffee for its drivers is naturally -- Sanka.

Air-conditioning is not needed since the internal temperature of the car stays at 22 degrees below zero. So yes...you do need to wear three winter coats since the heating system often breaks down. But don't park it outside in the Summer since it might melt. And of course, always wear gloves while driving, and pack plenty of blankets in case you get locked in the car. But hosting parties is always fun since you never need to buy ice. The vehicle is very popular in Minnesota and North Dakota, but prohibited in Florida and Texas. It also drives quite well on slippery surfaces (like ice).

3. GMC PedalMaster. Meet an innovative way to conserve energy, stay green, and exercise at the same time. There's no engine, but you can get plenty of pep from pedaling. A sophisticated set of pedals and pulleys allows you to pump your way to your destination. Just don't travel cross-country because you'll wear down very quickly. If possible, travel down-hill and avoid Pittsburgh, San Francisco, and Cincinnati because of their endless hills. Also, avoid any frozen lakes in Alaska or Michigan, or any state with limited bike paths. If you are counting your steps each day, expect about 25,000 every day. 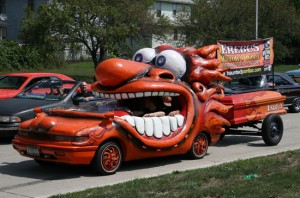 You never have to buy gasoline or oil, and rarely need to replace the tires. Our only concern is long-distance driving. We calculated it would take about 10 days to drive (pedal) from work to home. Traffic congestion could increase the time. Plan to pack a few meals and take plenty of rest stops. And expect to use a lot of your vacation time. If you were planning on driving cross-country, give yourself a few years. Perhaps a decade. And a few knee replacements.

4. Honda Seinfeld. That's right. Named after one of the most famous sitcoms ever, this vehicle is very popular, especially among people named Jerry, George, Elaine, Newman, and Kramer. Naturally, it's an incredibly clean car (just like Jerry) and instead of a horn, blurts out "Hello Newman!" Occasionally, this Honda is driven to New York Yankee games, so George can get a ride to work. That is...when George is not taking a nap under his desk. No soup for you!

Seinfeld fans will also understand why licking wedding invitation envelopes and eating Junior Mints are not allowed by any passenger. However, with special permission, you can drive to the Hamptons, or visit the "Bubble Boy." Although Jerry's father owns a Cadillac, this Honda is more popular with other family members. A "Curb Your Enthusiasm" vehicle might be created, depending upon Larry David's schedule. However, Season 11 of Curb may be the last.

5. Chrysler Robot. It is a 22nd-century car available now. Here's how it works: On the dashboard, you program the location where you want to go. And that's it. Lay back, relax and a few minutes later, you arrive. For longer trips (perhaps cross country), mandatory food and bathroom stops occur every three hours, assuming the vehicle stops. If not, waste bags are supplied and meals are served every eight hours. Accident-avoidance is not a current priority, and obeying speed limits is not a current feature.

Unfortunately, during the testing phase, many consumers have claimed that they are being driven to the wrong location. For example, a family in Charlotte, North Carolina had planned on taking a short trip to the grocery store. However, three days later, they ended up in Abilene, Texas. We're confident things will get worked out. Just pack for all weather conditions in case you end up in North Dakota instead of Miami.

6. Infiniti  Enterprise. Named after the famous Star Trek Enterprise, this vehicle can fly at warp speed while battling any Klingons that may get in your path.  William Shatner had a hand in the silly design, and intergalactic travel is made easy when you fly at Warp-6 speed. Sadly, it is very expensive to insure, since Vulcans aren't very good drivers. We're not sure about Klingons. But we do know that Dr. McCoy and Scotty are not good drivers, although they are much better when operating the shuttlecraft. Captain Kirk would make a great stunt car driver.

A built-in "trekking device" locates nearby Star Trek conventions on the on-board GPS, and whisks you there so you don't miss any of the action. A pair of replica Spock ears are provided to all car buyers in North America. 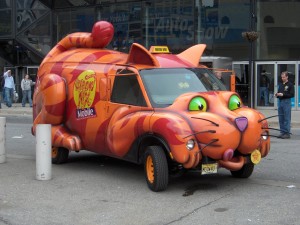 7. Cadillac Tricycle. This innovation and clever idea was developed by a second-grade class in Naperville, Il. The concept is fairly simple. You attach a small 2-cylinder engine to the back of a tricycle, add some safety features (such as a car seat), and keep the maximum miles-per-hour under 45. It's designed for your toddler that isn't old enough to drive (or perhaps walk), but is itching to get out on the road. A spare back of diapers can also discreetly fit under the driver's seat, along with three servings of apple juice.

Although air bags and anti-lock brakes aren't possible,  a mandatory helmet will be provided along with a kiddy cell-phone. And of course...No texting while driving! We bet you won't find another Cadillac like this! Financing is available, although you'll need your parent's permission. Sippy cups are not allowed, except on cross-country trips. Trips to school are encouraged, although traffic signs must be obeyed. A school parking pass may be required, and the keys may have to be left at the front desk.

8. Ford Casino. This is perhaps the most controversial of the new 2018 vehicles. A miniature roulette wheel and computerized black jack table are set up where the passenger seat should be. That's right. Passengers must sit in the back seat. At stop signs, red lights and any long traffic delays, you can relax, insert your personalized ID card, and make some money. A direct link to Gamblers Anonymous is provided, with two free counseling sessions provided each month.

The risk, unfortunately, is that you could also lose a lot of money.  Since the maximum bet is $10,000, a short drive to the grocery store could cost you more than $100,000. Of course, that assumes you had a lot of stops and red lights along the way. However, a free video, "The Evils Of Gambling," is also included when you purchase the vehicle. You can "bet" that it's great reading.

9. Lexus Plexus. This is the revolutionary exercise mobile. While you drive, a series of belts and pulleys helps you work on your abs and solar plexus. Although operating a vehicle with one arm can be very difficult, by the time you get to work, you'll feel invigorated. Of course, you may also be ready for a nap and may want to take the day off, and apply for disability benefits.

The cost of insuring the Plexus is alarmingly high because of the large incidence of accidents. So you'll need all of the best car insurance discounts you can find. I suppose that's what happens when you drive with one arm most of the time. But you also save money on purchasing expensive exercise equipment which reduces the sting a little bit. Just don't exercise in a closed garage.

10. Chevrolet Veggiemobile. It was bound to happen. A car that is manufactured  by vegetarians and whose inner and outer walls are made from dehydrated tomatoes, celery, and rutabagas.  You don't need gas to run this vehicle, but you need plenty of corn. It takes 25 stalks of corn to go a mile, so if you're planning a long trip, don't take any family members because you'll need the room. We estimate it costs about $6 per mile to operate the vehicle. If road conditions are icy or snowy, the cost increases to $8.50.

Tax credits reduce the cost to about $17,000. But in the testing phase, workers claimed smelling "rotten vegetables" every time the vehicle sat in the sun for more than a few hours. So obviously, unless you have an enclosed garage, don't buy this one. Not available for sale or use in Texas, Arizona, Texas, or Florida. Also, don't eat the steering wheel or dashboard while you drive. Children under age three have been known to eat their seat.

There you go. Ten of the most zany vehicles you will probably never see. Well... We hope not!